skip to main | skip to sidebar

I'm making some special cosmetic bags for the Buffalo store out of cotton. The construction is very similar to the Asian silk cosmetic bags with just a few added steps. When I'm done, I'll have about 30 bags total in 13 different prints.

I then select the fabrics that I'm going to make cosmetic bags out of. I cut 6" and 7" strips of each fabric by 45" wide. I peel off the glue paper backing off of one of the strips and then iron onto the glue side of the batting, one of my fabric selections. I then cut that finished strip of bonded materals into 6" x 8" rectangles, which will make the small size cosmetic bag, or 7" x 9" rectangles which will make the larger size bag. Once I have all my pieces bonded and cut out, I use my serger to overlock the edges.

Here are my completed stacks of overlocked pieces. 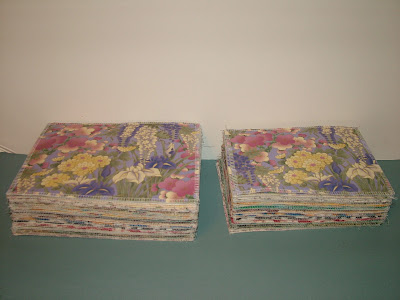 Next step is to pin the pieces together and sew a 5/8 inch seam using a basting stitch along the top edge. This is were the zipper will be sewn in. As you can see, I use binder clips to hold the pieces together when I sew. This means I don't have to puncture the vinyl with a straight pin. 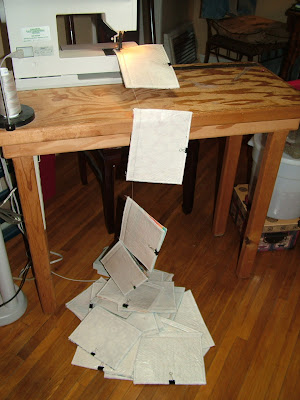 The next step is pressing open the seams, gluing in the zipper and putting in a limited edition label on the inside of the bag. I glue in my zippers because it just makes the process go a lot faster. 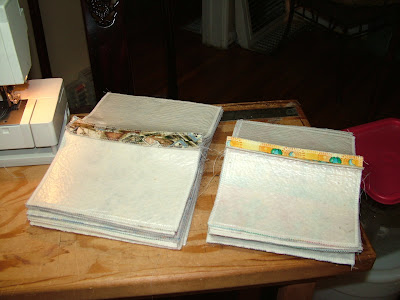 Once the zipper and label are glued in, I choose a matching thread for the fabric and sew in the zipper. 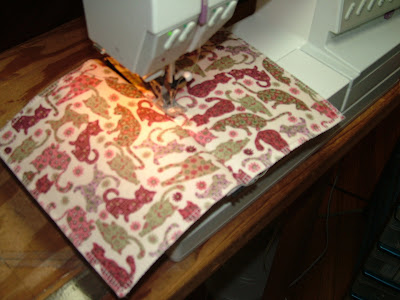 I then pull out the basting stitch, fold the right sides together and binder clip the pieces again. I then sew the bag together. 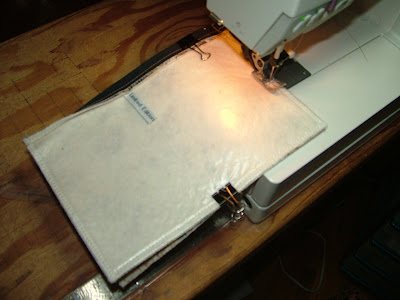 Once the bag is sewn together, I clip all the corner edges and turn the bag right side out. Here is a photo of the cosmetic bags in various stages. 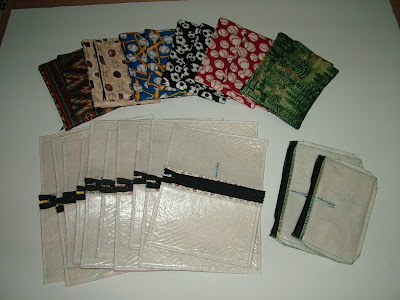 It will be a while before I'm finished. I am also making at the same time, some place mats and matching napkin sets out of some of these fabrics, and we are working on building some platforms on our roof so that Mr. Sprocket can work on our HVAC unit easier. Later this evening, I'll put up some more photos of that project.
Posted by Sprocket at 10:05 AM 1 comment:

The Joann Fabric Store...In My Attic

Do you know Kim, of The Darwin Exception? She is an exceptionally witty blogger and awesome knitter who has posted these wonderful photos of her sewing room and the ton of yarn and fabric she has in stock. She has quite a bit, but I think I've got her beat.

I've been longing to have my sewing room back. Our upstairs has been without walls or ceilings for over four years now. It's a real PITA to live in half a house and have your sewing projects strewn about virtually every room. And that's literally the case. My sewing table is in the living room and there are fabric bolts in the bedroom, 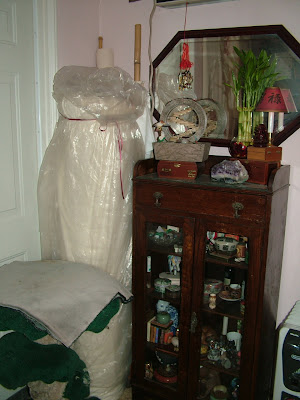 (That's a 60 yard roll of very soft polar fleece. And below are bolts of upholstery fabrics.) 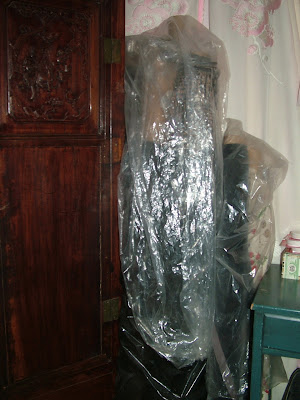 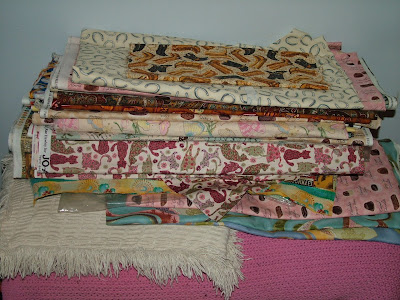 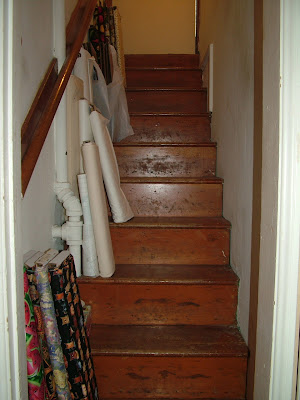 miscellaneous stuff in the dining room . . . 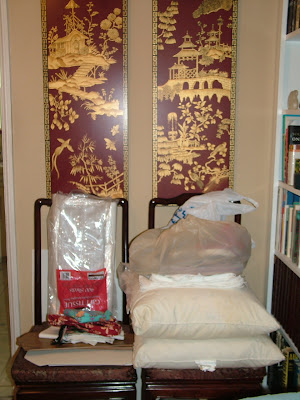 and that's just the stuff that I'm currently working with or plan to, soon. The only rooms that don't have any sewing items are the kitchen and the bathroom. There's also a mini Joann Fabrics store in my attic, and I still have about eleven crates of finished items in the still-in construction-stage sewing room. 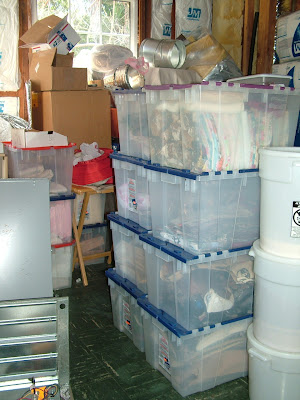 When I first moved into this house about 11 years ago, I only used the second floor rooms for storage. Years later when I got married, we made the downstairs room I was sewing in into an office for the both of us and moved my sewing and cutting tables upstairs. But that presented me with a problem. The upstairs rooms did not have air conditioning. They were unusable during the 100+ temps in the summer and autumn months. So in late 2003, we debated the merits of several plans to air condition the upstairs and finally decided on installing a central air and heating system in this 67 year old house. We planned on doing all of the HVAC installation ourselves.

Although Mr. Sprocket is an HVAC service technician with about 20 years experience in the field, he specializes in service for large complex commercial spaces with one or more 100 ton units on the roof of tall office buildings. Most people don't know that HVAC service is a specialized field. There are those who do installations (mostly grunt work) and there are those who finish a system install by starting up the system as well as service and troubleshoot complex systems. People who do installations rarely have the knowledge to do service and vice versa. This would be Mr. Sprocket's first residential install, with duct work and everything. Usually when he is involved in the install on a commercial building, it's at the end of the job when the unit is being craned onto the roof and he performs the system start up, which can take several days to do it properly.

In the first stages of planning this project, we were trying to think "where" we could put all my fabric and other stuff while we tore out the walls and ceilings in the upstairs rooms. I suggested putting a floor in our attic with a thin outdoor carpeting to make it easy to move around. Renting a storage space would have been a pain in the arse to have to go to, just to get my fabric. We had already spent months in our first floor attic installing insulation, rewiring the entire house and upgrading the electrical box to something that wouldn't be such a fire hazard. So installing a floor and lighting in there was like, Wow, we should have done that sooner!

We started our HVAC project in May of 2004, and exactly two years later, the city signed off on the building permit, the electrical system upgrades we did ourselves as well as the new tankless water heating system, which was also installed on the roof. (That's a story for another day!) I now know how to properly wrap metal ductwork with insulation, since I wrapped virtually every metal duct box myself and the many branching "T-Y's" but I don't think this is a skill I'm going to be using anytime soon. It is almost two years since the system was installed, yet, there are no walls or ceilings upstairs and I'm still sewing in my living room.

But back to that fabric store in my attic. Here is a photo of the main attic space soon after we finished the attic duct work and before we removed our tools and left over insulation: 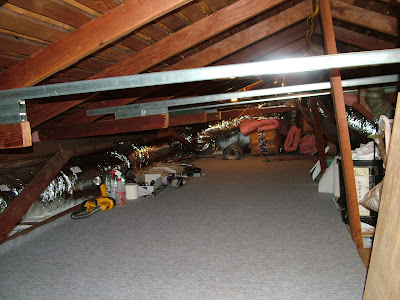 As you can see, we raised the cross beams by replacing them with metal strut at a higher level so it would be easier to crawl around. Here are some photos I took today of the Joann Fabric Store in my attic. This first one is the entrance to the first floor attic. It's through a closet off the smaller second floor room. 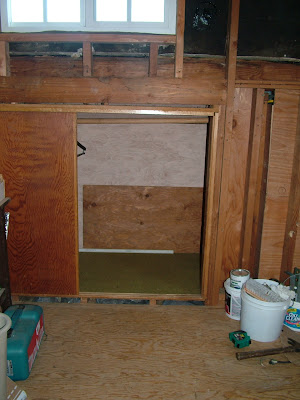 And here's a view of the attic as it looks now, just as you enter: 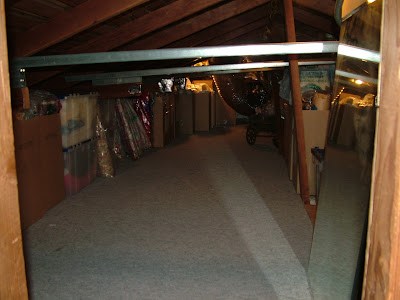 On the left near the entrance are boxes full of wilderness and western print bolts for the Buffalo store: In the middle left, just beyond the two crates of eyelet, blackout material and scrap flannel, are my bolts of Asian prints. There is another row of boxes behind the ones you see in the photo. 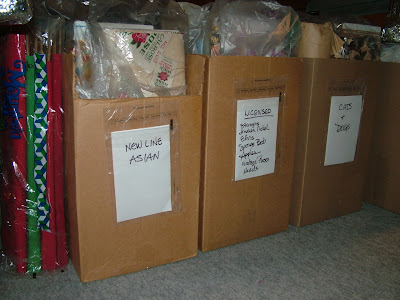 And in the far left are eleven boxes of flannel bolts, all organized by type of print: 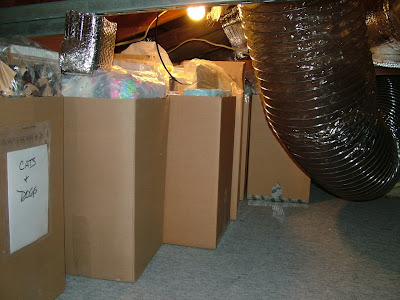 Off to the far right are about twelve crates of upholstery and tapestry fabrics as well as scrap panne: 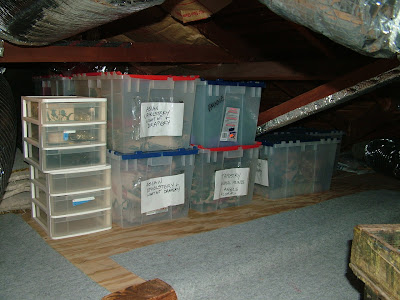 On the right side of the attic near the entrance are six crates of small cotton pieces (2 yards or less) and Christmas fabrics. Farther down beyond the crates are four boxes filled with different colored bolts of panne and two boxes filled with rolls of the Asian silks. 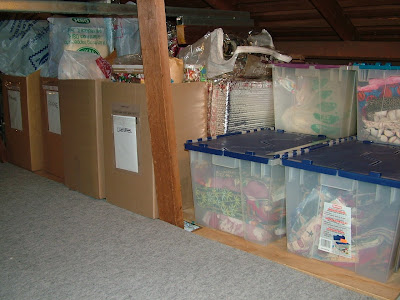 One of these days I hope to have a finished sewing room, with special cabinets along several walls to hold all my cotton and flannel fabrics. Until then, I will have to keep my mini store in the attic!
Posted by Sprocket at 10:15 PM No comments:

My Etsy Store has the last of my tea napkins in the CLEARANCE section.

Mr. Sprocket and I have been working every weekend on a very time consuming house project but I've finally had some time to get back to sewing. I'm gearing up for a big production of several items for the store in Buffalo that carries my western and wilderness prints. I haven't sent them anything in well over a year and I have a few new items planned in limited edition prints.

One of the new items I'm planning are "Tea Napkins." Some might call them a cocktail napkin but I like calling them Tea Napkins. Since my friend donchais suggested the idea of a small, dainty napkin, I'm naming them after her.

Here are some photos to give you an idea of what they look like. The donchais tea napkins are 10" square and are finished with a rolled hem. They will sell as a package of four, but a retail price has not been set yet. They will probably run about $12 for a set. Some of these prints are limited editions purchased just for these napkins.

These napkins are exclusive to the Buffalo store. 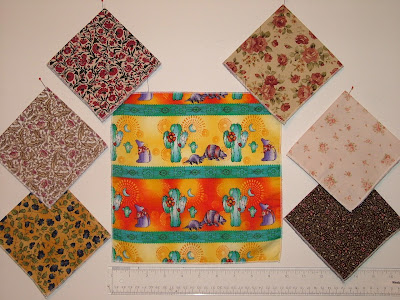 The napkins below are in new prints that are available to everyone. 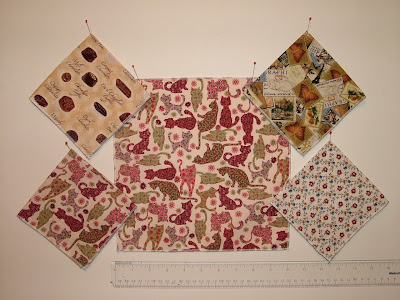 You can order a set of the Donchais Tea Napkins in any cotton print I have in stock. All of my table linens are made from cotton or cotton and muslin are pre-washed before they are sewn, so the size you see in the image is the size you get.

And here is the complete stack of Donchais Tea Napkins I just finished. All of these are headed for the Buffalo store. 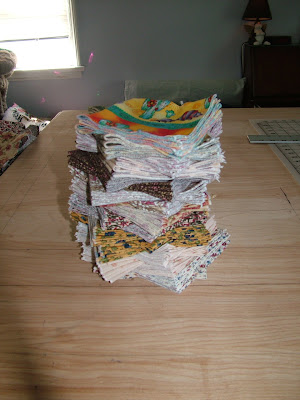 WHAT PEOPLE ARE SAYING 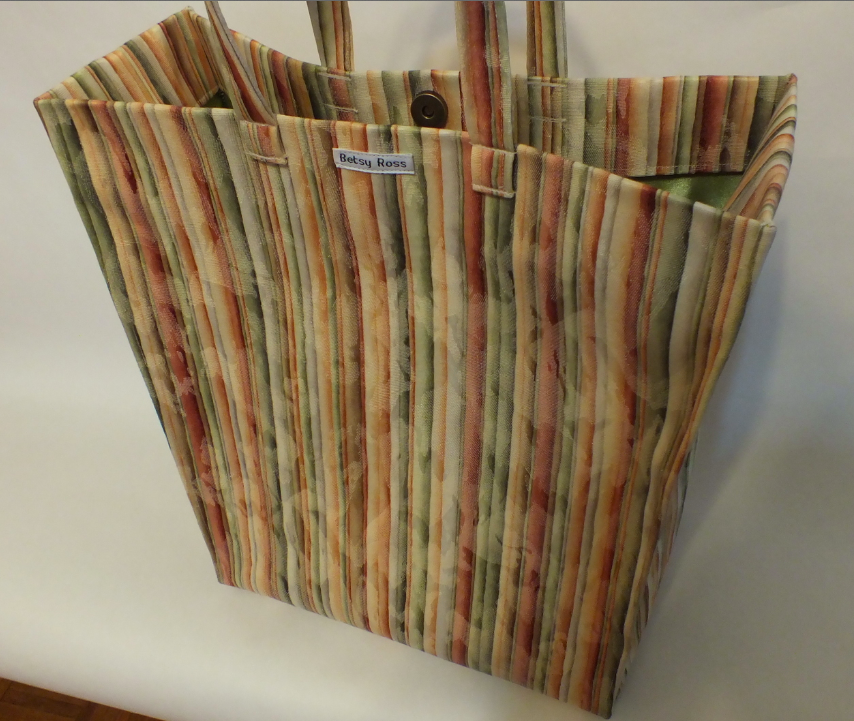 Sprocket
I’ve had a life-long interest in true crime ever since, in my late teens, I read the Manson books, Helter Skelter and The Family. The first trial I attended in person was the Robert Blake murder trial in 2005. I wrote about my experience on Internet crime forums, where many people were interested in the Blake case and debating it. All the participants used Internet handles. For myself, I chose the name Sprocket, my all-time favorite kitty. In 2007, I attended the first Phil Spector trial and started Trials & Tribulations. I kept writing as Sprocket. While I write under a pen name, I use my real name in court and while reporting. In January 2011, the Los Angeles County Superior Court officially recognized me as a member of the media. I also have a small seasonal sewing business, Betsy Ross Linens. I enjoy gardening and reading. In 2019 I stopped my public service covering the LA County Superior Court and entered a new career path.